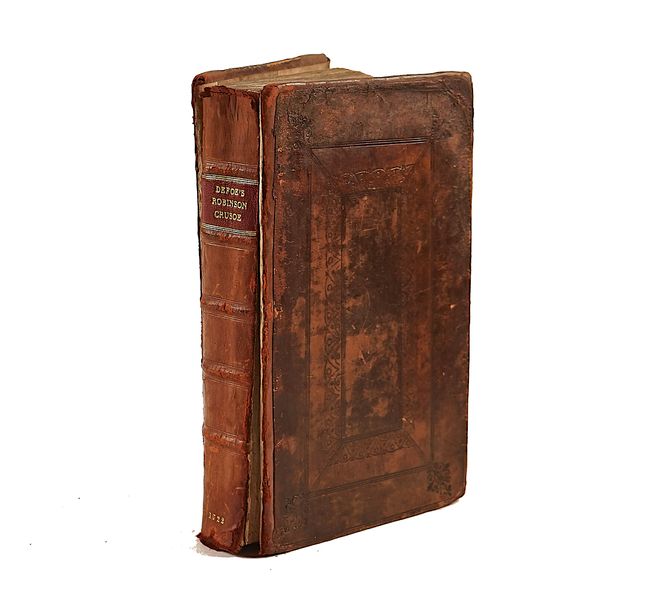 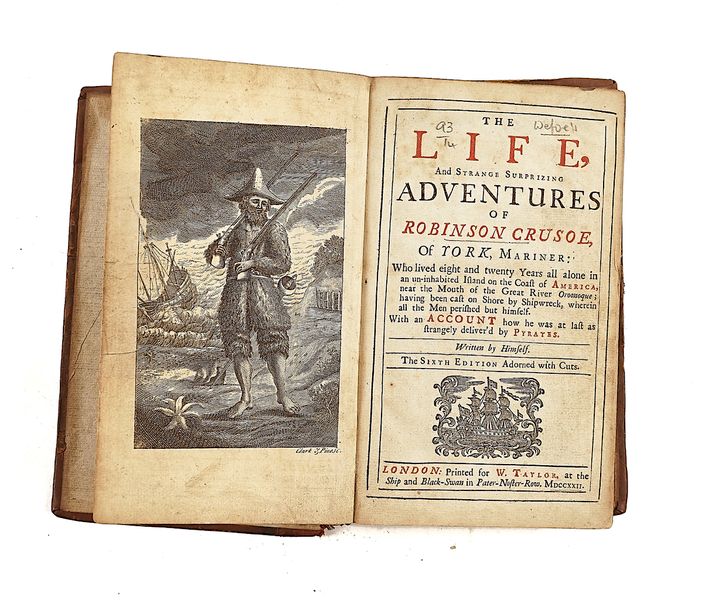 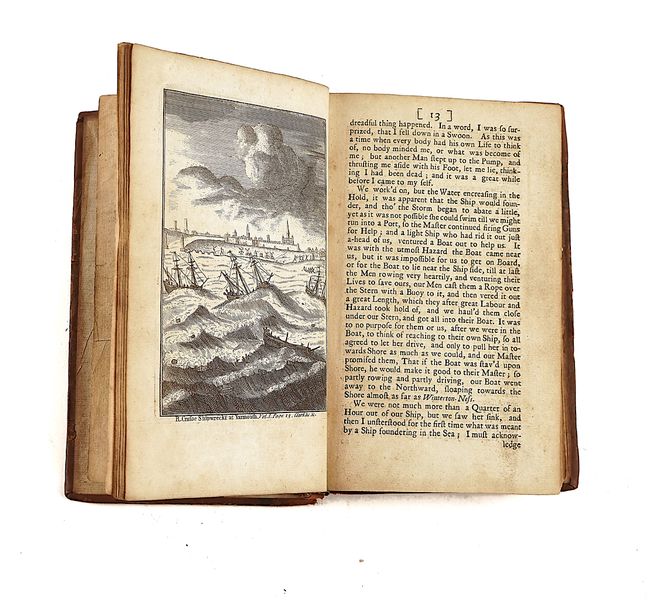 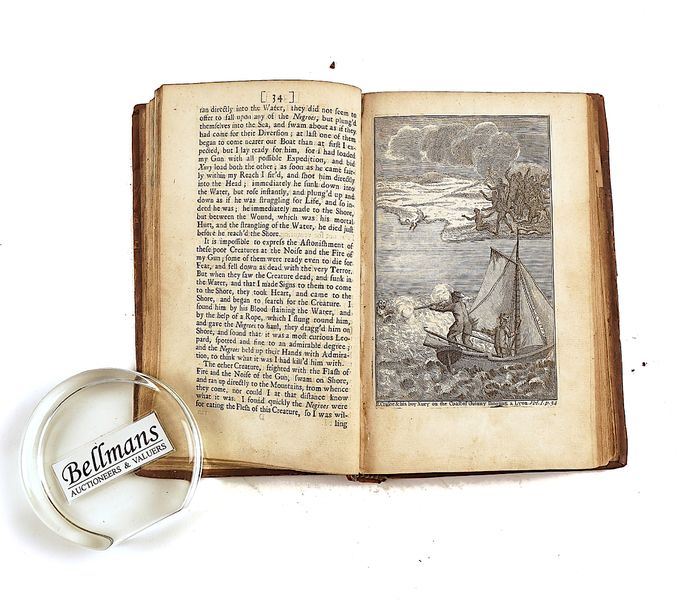 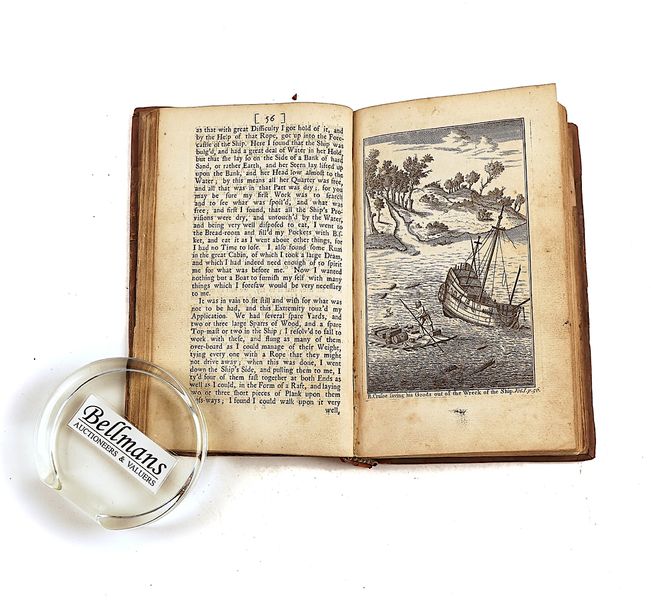 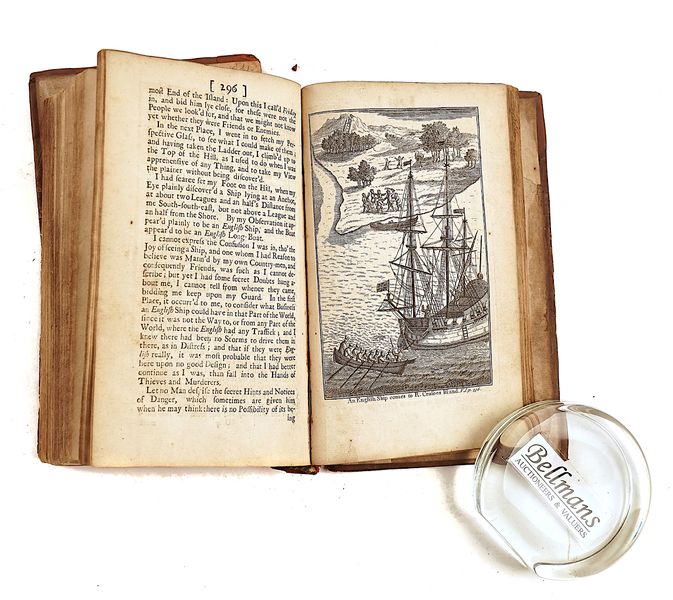 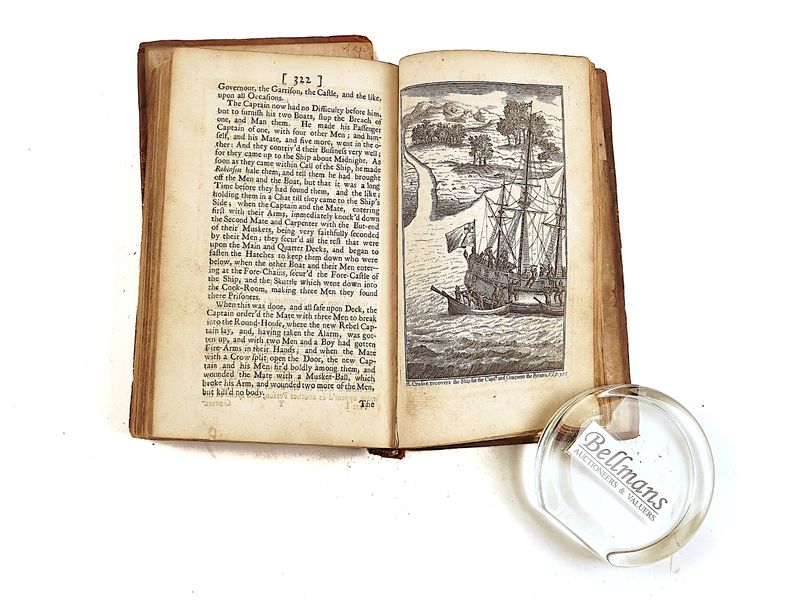 [DEFOE, Daniel (c. 1660-1731)].  The Life and Strange Surprizing Adventures of Robinson Crusoe, of York, Mariner: Who lived eight year and twenty Years all alone in an un-inhabited Island on the Coast of America ... The Sixth Edition. London: Printed for W. Taylor, 1722. 8vo (190 x 115mm). Engraved frontispiece, title printed in red and black with woodcut illustration of a ship, headpieces and initials, 6 engraved plates, 4-pages of publisher's advertisements with woodcut illustration at the end ([?]lacking map, frontispiece repaired with very slight loss, some mainly marginal spotting and staining). Contemporary panelled calf (upper cover detached, rebacked and with some repairs at edges, rather worn). Provenance: "Sarah [?illegible name] her book 1730" (inscription on front free endpaper); later illegible faint pencil inscription above it. cf. Grolier English 41; Lowndes 613-614; Moore 412; Pirie Library 890 (citing the first Stockdale edition of 1790); PMM 180; Rothschild 775 (the references citing the first edition of 1719, except where indicated). The work is considered to be the first novel in the English language. The present volume is complete in itself although two lesser-known 'sequels' were published (neither present here), "The Farther Adventures of Robinson Crusoe", first published in 1719, and "Serious Reflections during the Life and Surprising Adventures of Robinson Crusoe", first published in 1720. "After twenty years of enormously prolific pamphleteering, political and sectarian, sometimes in verso, Defoe suddenly disclosed a genius for devising a tale of adventure ... This influence is not yet dissipated, for much of science fiction is basically Crusoe's island changed to a planet. At least equally relevant to the present purpose is the figure of the lonely human being subduing the pitiless forces of nature; going back to nature, indeed, and portraying the 'noble savage' in a way that made the book required reading for Rousseau's Emile" (PMM).