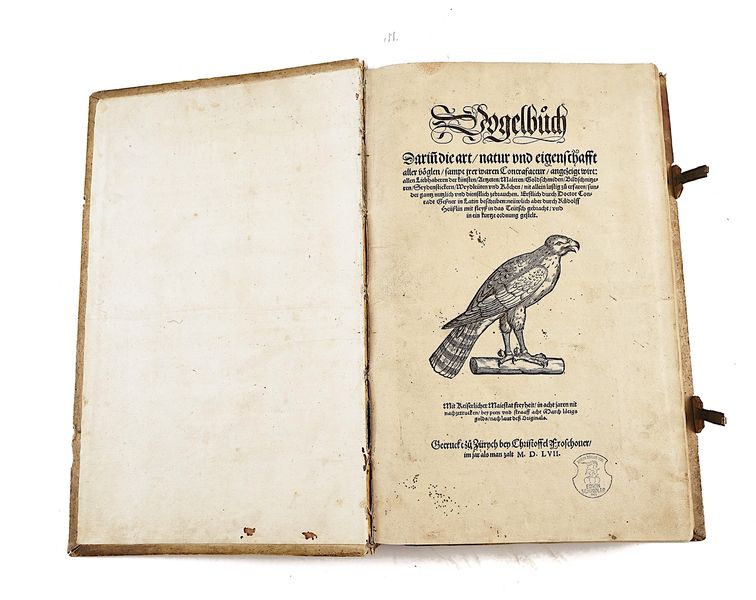 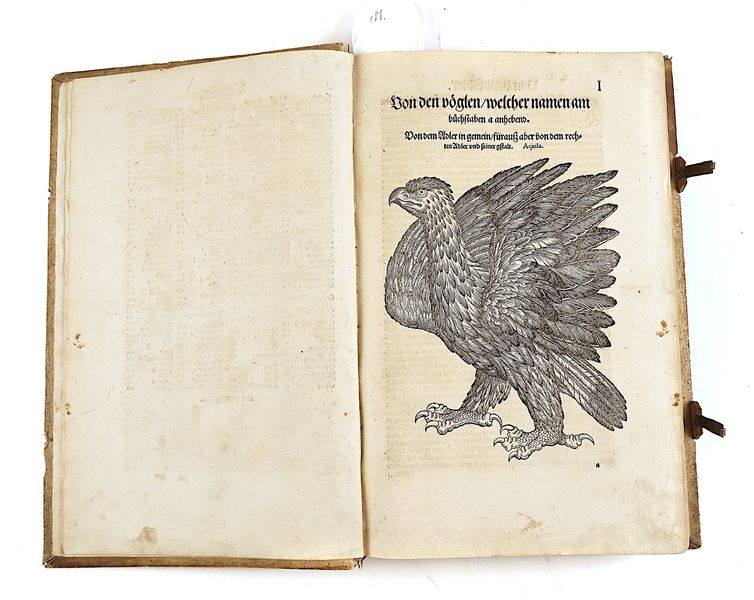 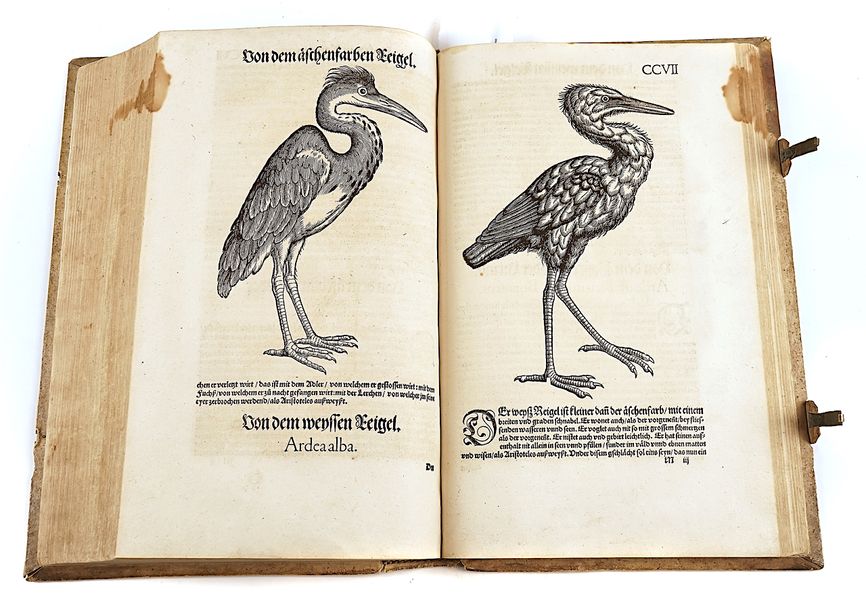 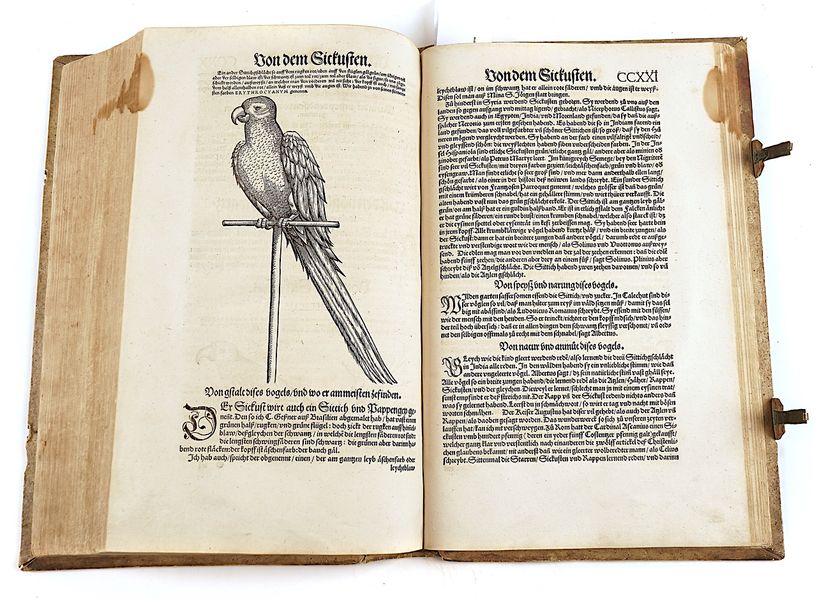 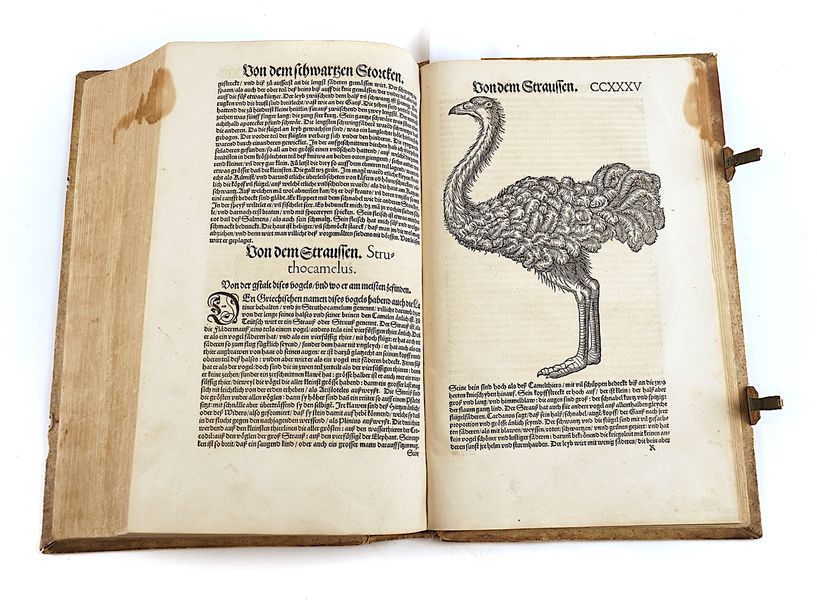 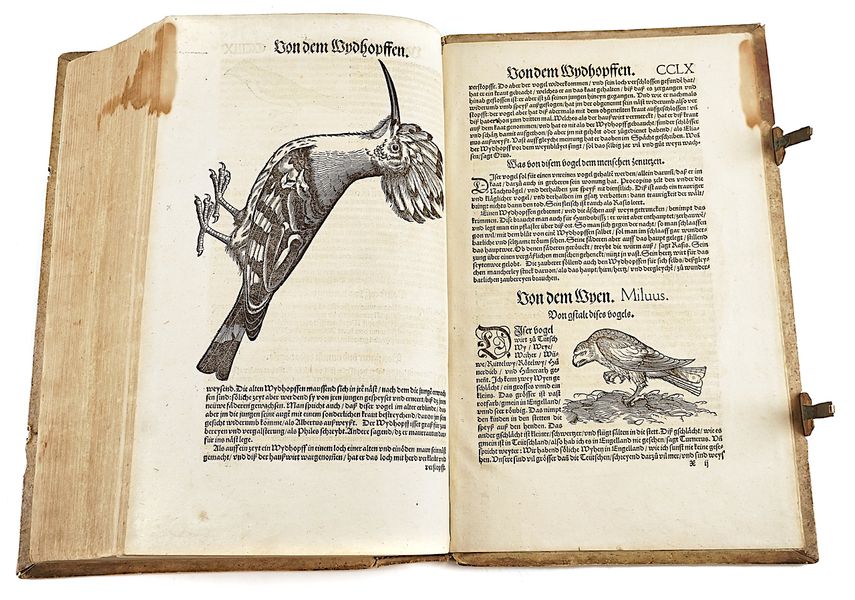 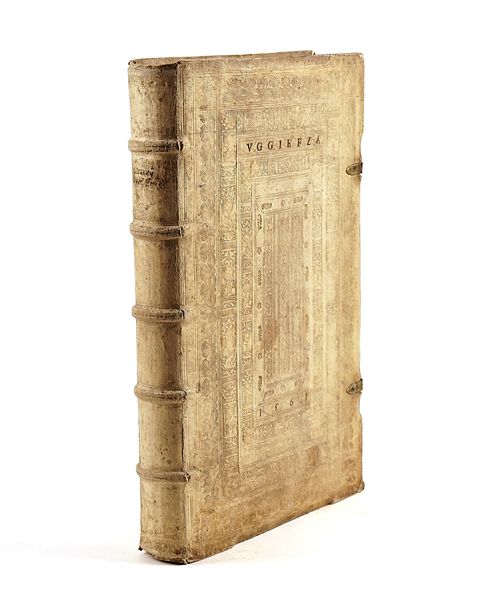 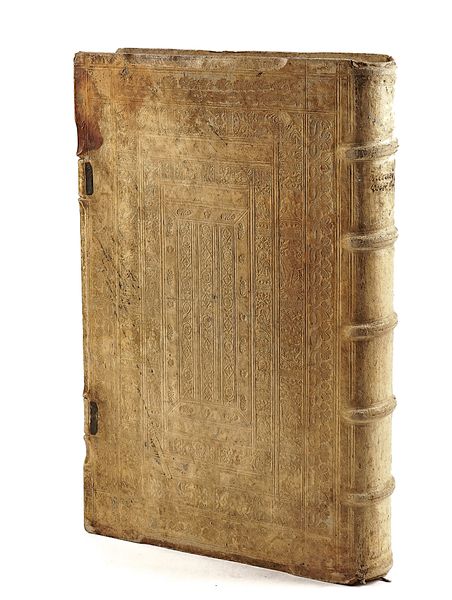 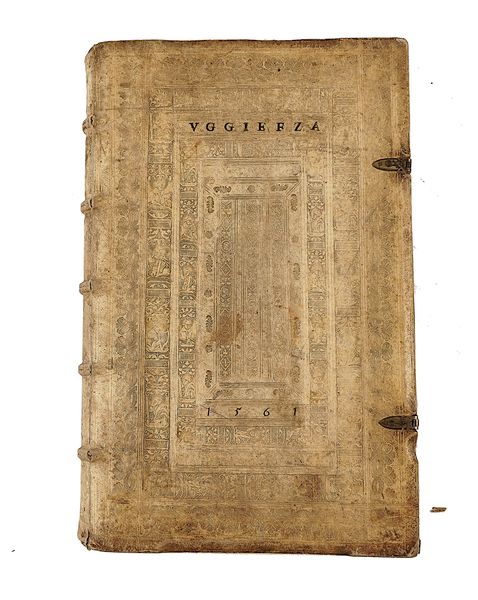 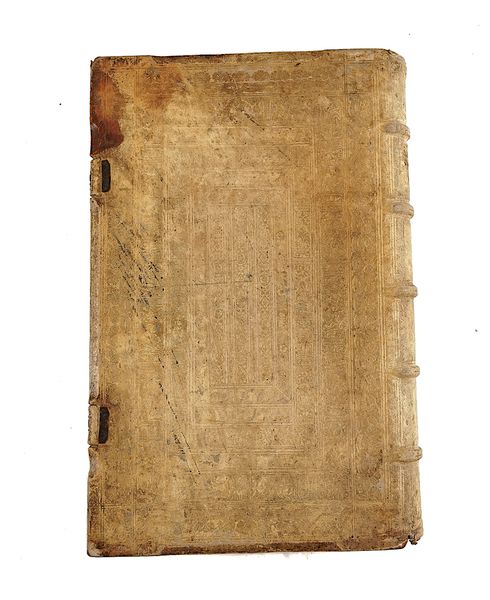 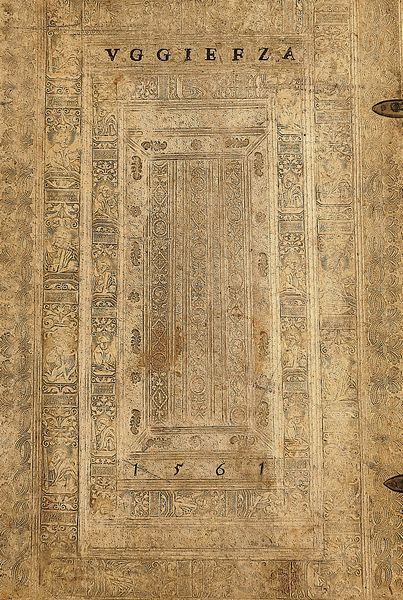 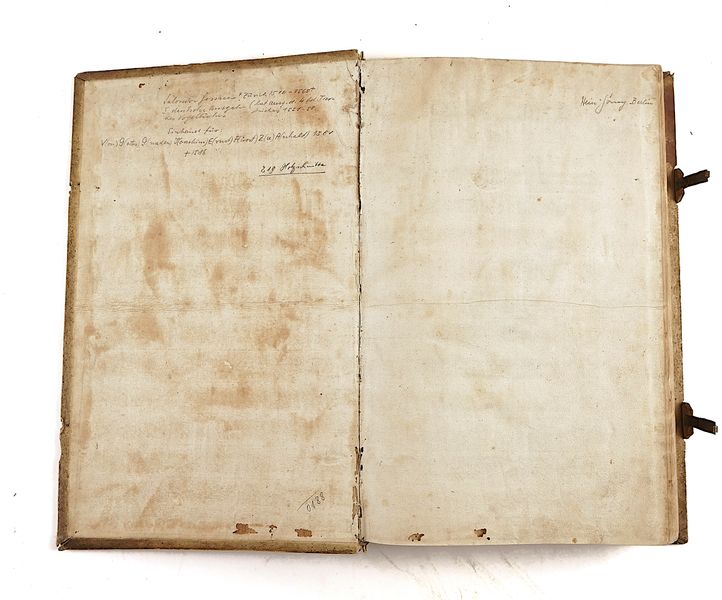 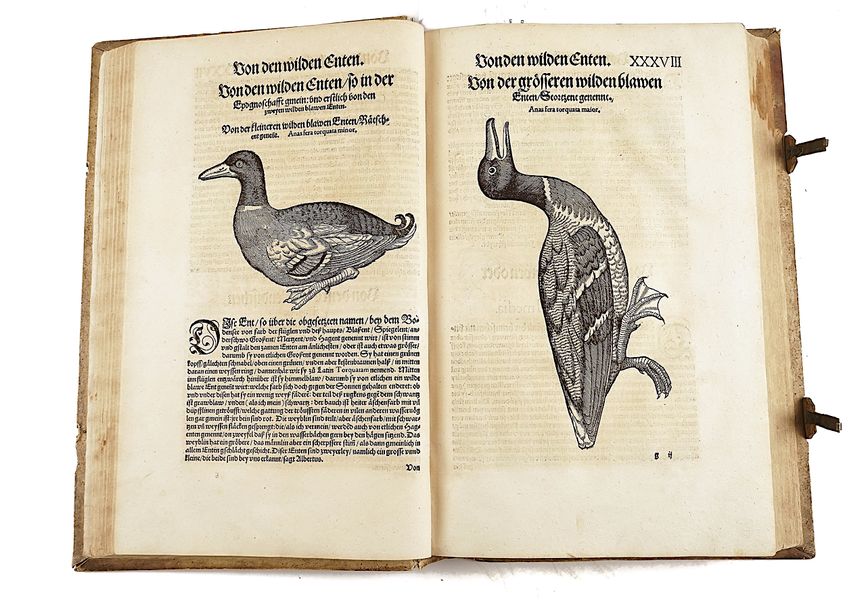 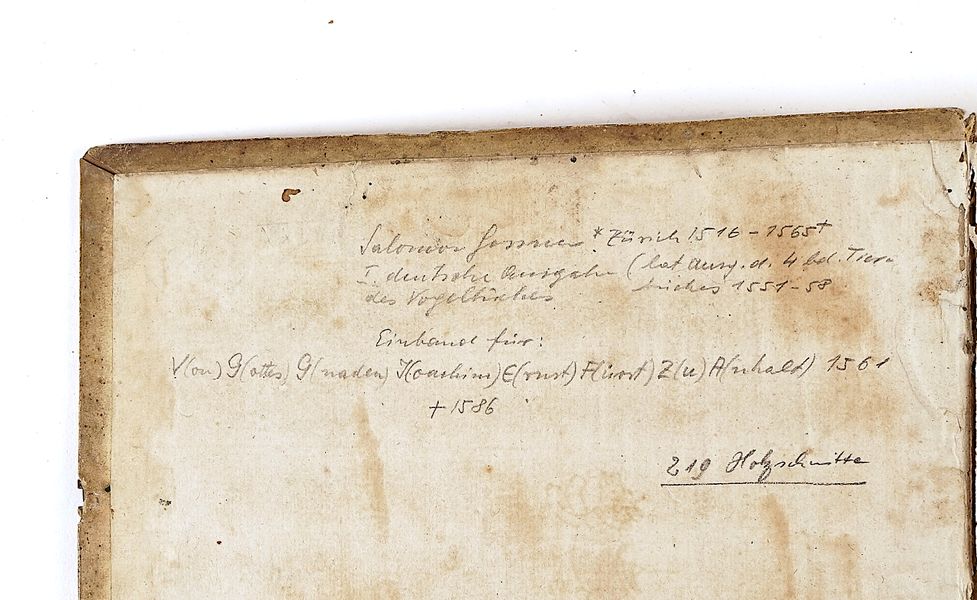 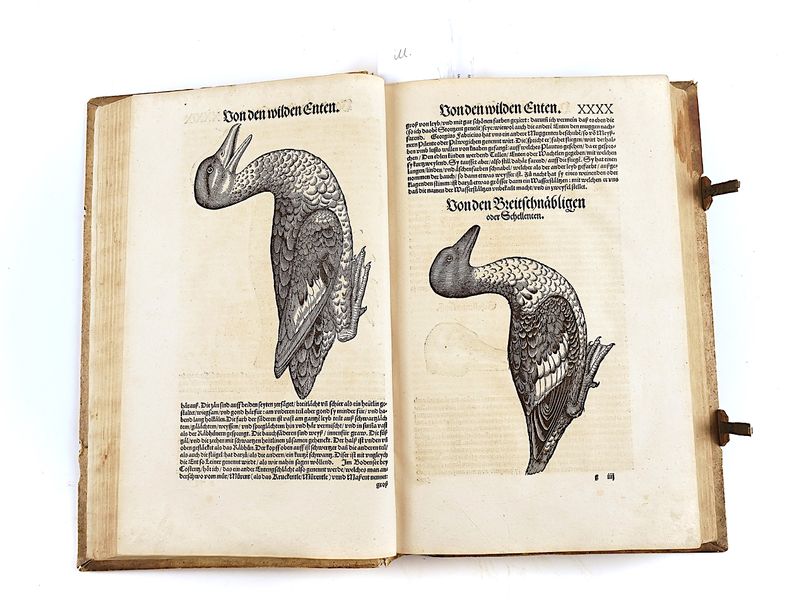 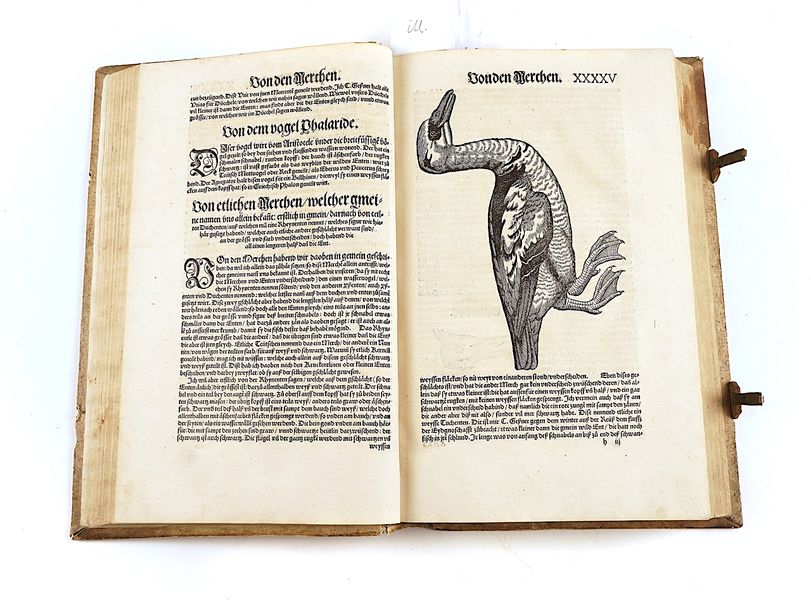 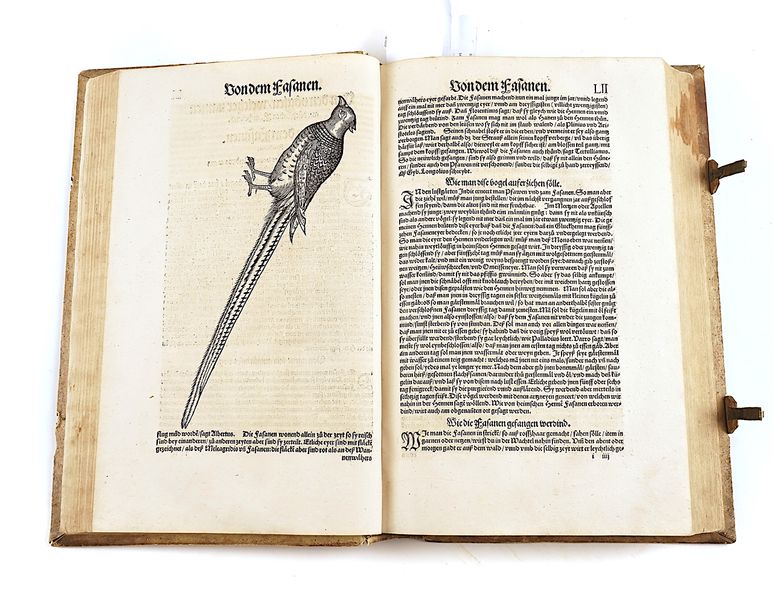 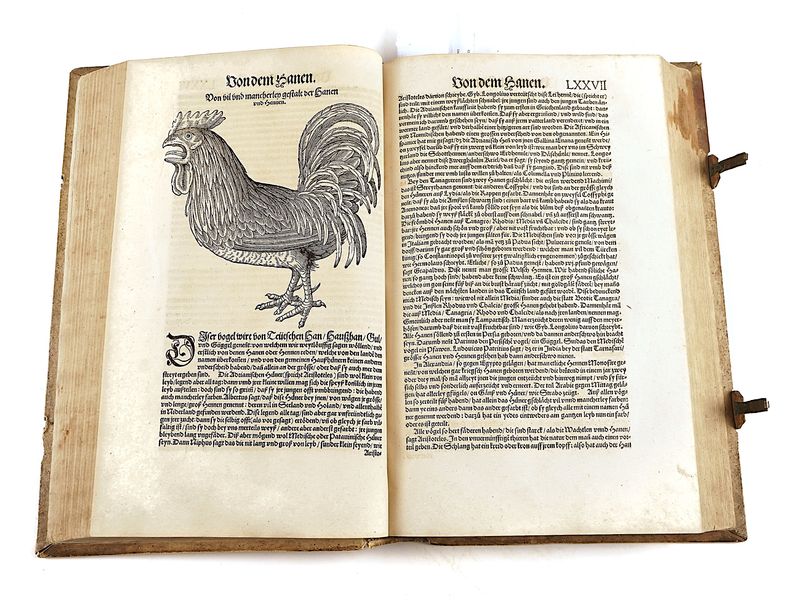 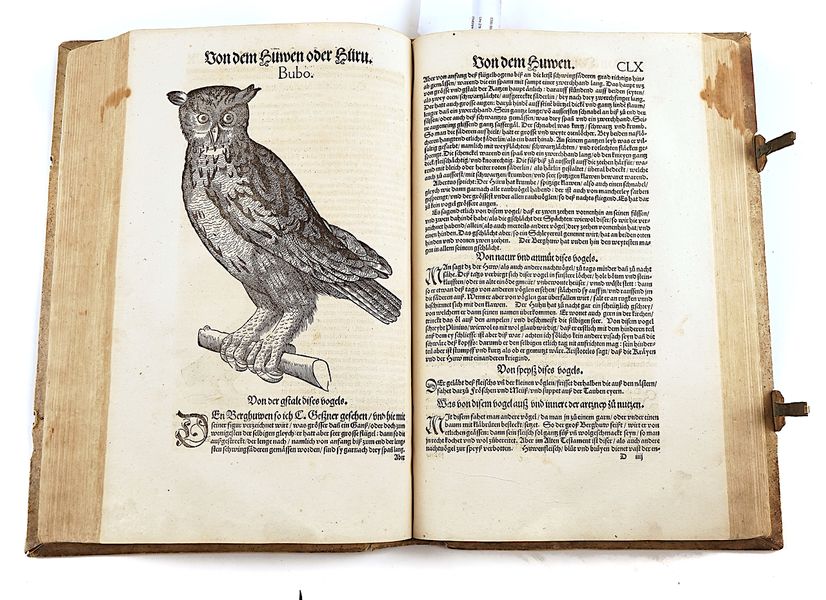 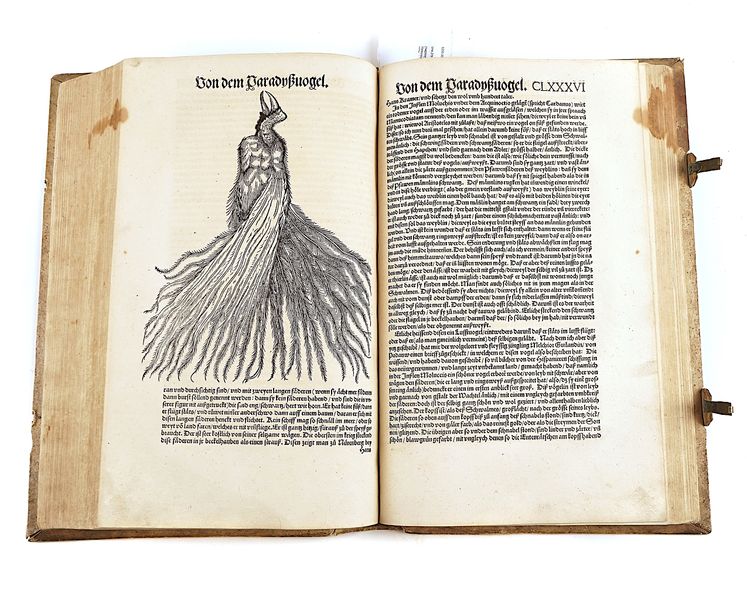 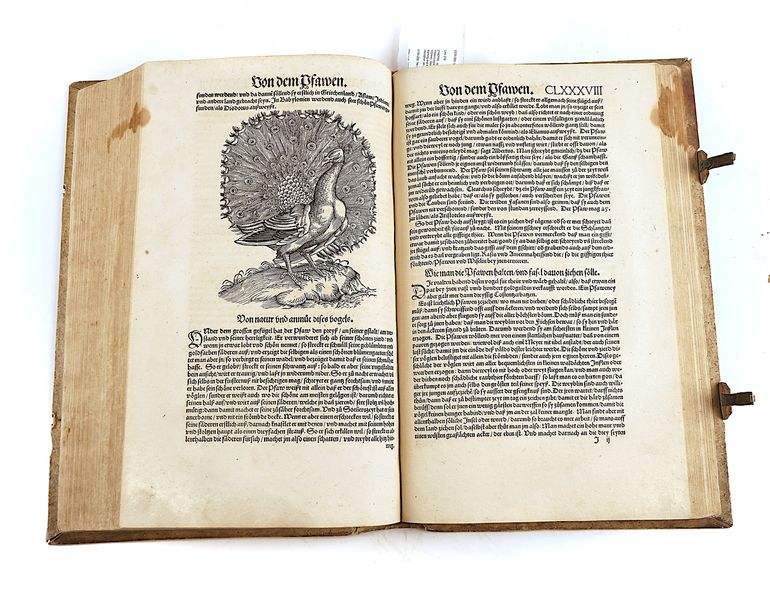 GESNER [or GESSNER], Conrad (1516-65).  Vogelbuch. Darin die art, natur und eigenschafft aller vöglen. Zürich: Christoffel Froschouer, 1557. Folio (384 x 245mm). Woodcut illustration on title, initials, 219 fine woodcut illustrations of birds, most attributed to Lukas Schan [or Schram] of Strasbourg (a few small holes to title not affecting letters or illustration, 3 leaves torn without loss not affecting illustrations, marginal stain starting at LXXXVI and expanding towards the end, but not affecting text or illustration, a few other mainly marginal stains and spots). EXCEPTIONALLY FINELY BOUND IN ELABORATE CONTEMPORARY BLIND-STAMPED PANELLED PIGSKIN, with small figures of the Apostles, and old, probably original, engraved clasps, the upper cover with the initials "VGGJEFZA" and the date "1561" stamped in black, the spine with 5 raised bands (some light staining and rubbing). Provenance: later pencil inscription on the front pastedown explaining the initials on the front cover: "V(on) G(ottes) G(naden) J(oachim) E(rnst) F([illegible word]) Z(u) A(nhalt)";  later illegible pencil signature on front free endpaper; Edwin Schindler 1950 (marginal stamp on title). THE FIRST GERMAN EDITION of the second volume (on birds) of Gesner's monumental work of natural history, often regarded as "the starting-point of modern zoology" (Anker). "Conrad Gesner was one of the great polymaths of the Renaissance ... His 'History of Animals' is an encyclopedia of contemporary knowledge, intended to replace not only medieval compilations but even Aristotle's work of the same title ... The work consists of five large volumes [of which the present volume is the second] ... The first four volumes deal with quadrupeds, birds and fishes; the posthumous fifth volume with snakes and, in an appendix, scorpions ... Although the Historia animalium does not yet show any recognition of a connexion between different forms of living nature and fails to conform to our modern ideas of biological research, it was a great step forward and remained the most authoritative zoological book between Aristotle and the publication of Ray's classification of fauna in 1693" (PMM). Anker p.10-11: "The volume dealing with birds ... was [first] published in 1555. It gives descriptions and pictures of a large number of birds (altogether 217 figures) material for which was drawn from many different sources ... But this volume also contains original observations made by the author or by his contemporary and fellow zoologists, from whom he procured information ... Gesner's encyclopedic work acquired such prestige and importance during the following period that it is often regarded as the starting-point of modern zoology. Its great reputation and wide circulation were largely due to the fact that it was decorated with so many pictures in the form of woodcuts that it marked a new departure in the field of zoological illustration"; Brunet II, 391-392 (citing the full work "Historia animalium" of 5 vols., but not mentioning this edition of the ornithological volume, or erroneously dating it to 1554): "Pendant près de deux siècles ce grand ouvrage a été le livre le meilleur et le plus complet que l'on eût sur la zoologie générale, et sous plus d'un rapport il mérite encore une place distinguée dans la bibliothèque du naturaliste curieux de suivre l'histoire des progès de la science"; Nissen IVB 350; PMM 77 (citing the full work "Historia animalium" of 5 vols.); Wood p.356.